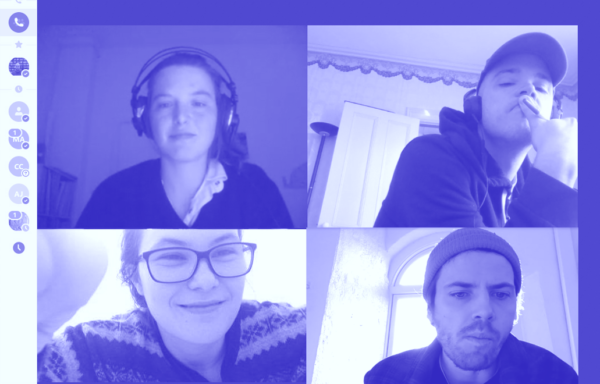 Four drummers, four drumkits. For this new work, commissioned by Borealis, drummers Michaela Antalová, Chris Corsano, Anja Jacobsen and Øyvind Skarbø spent a week together in Slovakia developing a piece that draws on the creative synergies, and tensions, that exist within a group of four individual musical personalities. With the only condition that they create a new piece for four drummers playing four drumkits, the four composed a piece that captures the energy of an improv set, yet has the structure of a composition. Weaving rhythmic and melodic elements throughout it’s a piece that can only be played by eight arms. Each drummer brings to the group a background in innovative drum experimentation, as well as experience in different shadowy corners of the drumming world ¬– from new percussion music, to free improv, jazz drumming to experimental collectives. In building a project with only drummers we wanted to highlight the infinite soundworlds that the instruments possess, and to place the creative output of those who play them within a new frame. With the four drummers having never played together before this project, DRUMS is as much a social experiment in collective composing as a musical one.

Drums is presented as part of the Fresh Air project.
‘Fresh Air: Current tendencies in music, cinema, theatre and media art’ is a collaboration with A4 and NEXT festival in Bratislava, and supported by EEA Grants and the Government Budget of the Slovak Republic.

Michaela Antalová is a Slovakian drummer living in Oslo who does solo performances and runs several bands; Drum duo Nutela, quartet Fennel which improvises with acoustics guitars and vocal, and also the alternative pop band Bye Victoria, all based in Oslo. She explores improvisation in many settings and is also a member of the Prague Improvisation Orchestra and collaborates with several musicians in the Czech Republic, often as a guest in the alternative rock band Květy or in the improvised duo Antalová/Tarnovski. Playing with percussionists and exploring the possibilities of percussive instruments is her main focus and in the solo album Oblak, Oblek, Oblúk Michaela showcases her instrument.

Chris Corsano is a drummer who has been at the vanguards of free improvisation, avant-rock, and noise musics since the late 1990s. He has worked with saxophonists like Paul Flaherty, Joe McPhee, and Evan Parker; guitarists Sir Richard Bishop, Heather Leigh Murray, and Jim O’Rourke; and one-of-a-kind artists like Björk, Ghédalia Tazartès, Merzbow, and Jandek. Constantly seeking to expand his sound beyond conventional notions of what drums can and can’t do, he attacks his kit with everything from cello strings stretched across a snare drum to contact microphones to a slew of extended techniques of his own creation.

Anja Jacobsen is a composer, drummer and percussionist from Copenhagen. Under the name Frk. Jacobsen she performs solo sets with percussion and voice, exploring human fascination of outer space. Anja is a drummer and co-composer in Selvhenter, a band that has played all over Europe and Japan in recent years, receiving critical acclaim for their combination of unusual instrumentation, musical adventures and energetic live shows. In addition to being co-founder of the Danish art collective and label Eget Værelse, she’s also the brain behind, and leader of Valby Vokalgruppe; a band that explores the voice as the centre of all compositions.

Øyvind Skarbø: “I started playing drums in a local school band in my hometown Stranda when I was 9 years old. I’ve kept at it ever since. I’ve studied all sorts of music. A key concept for me is the freedom to play as I want to, for instance through improvisation. Improvisation as a tool, as opposed to related to a specific genre. I don’t like when music gets too loud. I feel that the tension is stronger when there is an emphasis on dynamics. My favourite record at the moment is Al Green’s Let’s Stay Together.”