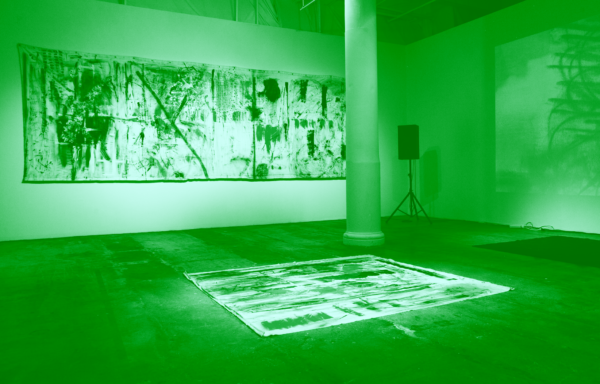 On the Thursday, Friday and Sunday of the festival there will be musical interventions in the Matana Roberts exhibition in Bergen Kunsthall. Artists featured at the festival are invited to give their interpretations of Roberts’ works inside the exhibition.

The exhibition I Call America attempts to capture “the perplexity of what it means to be American in the twenty-first century”. The exhibition is Matana Roberts‘ first in Europe and is based on a comprehensive project that was first conceived during a residency at the Whitney Museum of American Art, and then realised as an exhibition at the Fridman Gallery in New York in 2016.

Jennifer Walshe is a composer and performer from Dublin, Ireland, and was named as “the most original compositional voice to emerge from Ireland in the past 20 years” by The Irish Times. Her music has been commissioned, broadcast and performed all over the world and she has been the recipient of fellowships and prizes from the Foundation for Contemporary Arts, New York; the DAAD Berliner Künstlerprogramm; the Internationales Musikinstitut, Darmstadt; and Akademie Schloss Solitude, among others. Jennifer has written a large number of operas and theatrical works, including XXX_LIVE_NUDE_GIRLS!!!, an opera for Barbie dolls and Die Taktik, for the Junge Oper Stuttgart.

Matana Roberts is an award winning, internationally renowned composer, bandleader, saxophonist, sound experimentalist and mixed-media practitioner, working in many contexts and mediums including improvisation, dance, poetry, and theatre. Her innovative work has forged new conceptual approaches to considering narrativity, history, and political expression within improvisatory structures. Past member of the BRC: Black Rock Coalition and the AACM: Association for the Advancement of Creative Musicians. Matana holds two degrees in music performance and is based in New York City.