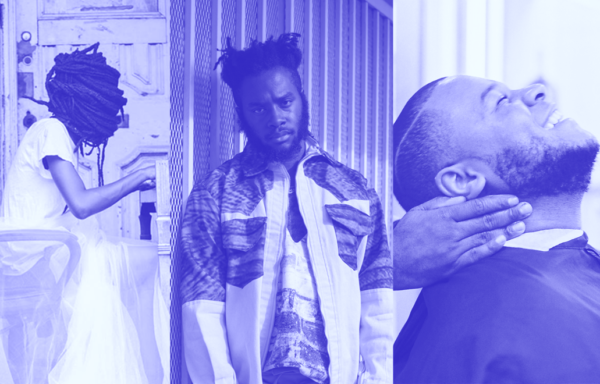 Borealis’ 2017 Utmark collaboration brings another night of visceral new sounds, featuring two artists from the US – Moor Mother and Abdu Ali, who are bending definitions of rap and channelling a new afrofuturism to create raw platforms for new messages – and DJ Marfox, bringing the rhythms of Lisbon’s Angolan-Portuguese underground to the dance floor. From Philadelphia, USA, interdisciplinary artist Camae Ayewa’s Moor Mother project blends protest and time-travel in a whirlwind of often angry, experimental noise and poetry. Abdu Ali straddles the worlds of Baltimore clubs and experimental rap, weaving powerful verses on homophobia and racism in to a wild uncategorisable live performance. Closing out the night is DJ Marfox, label boss of Lisbon’s acclaimed Principé label, which has been at the forefront of releasing contemporary dance music coming out of Portugal’s capital, its suburbs, projects & slums.

Presented in collaboration with Utmark.

From Philadelphia, USA, interdisciplinary artist Camae Ayewa’s
Moor Mother project blends protest and Afro-futurist time-travel in a whirlwind of experimental noise and poetry. Projecting both the cathartic anger of punk and the expansive improvisatory spirit of Sun Ra, she uses a variety of machines, field recordings, and analog noisemakers to construct fractured, cacophonous waves for her punishing words to ride. Her latest album, Fetish Bones, released in September 2016, was No.3 in the The Wire magazine’s albums of the year.

Raw and complex, and blurring all sorts of lines, Abdu Ali is a queer rapper from the US city of Baltimore who adds powerful lyrics about racism and homophobia to both killer dance tracks and more experimental productions. Sometimes compared to Death Grips or other contemporary ‘noise rap’ bands for his incredible energy on stage, he has created his own sound, influenced by punk, noise, afrofuturism and BMore club music, based on his own experiences and personal history. In 2016 he released MONGO, which Fader magazine called “a pitch-perfect ‘black self-care mixtape’ from Baltimore’s most exciting rapper.”

In
DJ Marfox aka Marlon Silva´s hands, Angolan roots meets Portugal today, and kuduro – the electronic music of Luanda – undergoes a twisted transformation as it lands and is reborn in Lisbon’s urban Afro-Portuguese dance scene. As a DJ, producer and now boss of record label Príncipe Discos, he believes claiming ones roots is a crucial impetus for creative, technological, and collective social evolution. His music has acquired iconic status in urban Portugal and diasporic African communities throughout Europe, and helped to create a grassroots network of young, creatives seeking to breach new territory in sound and culture.