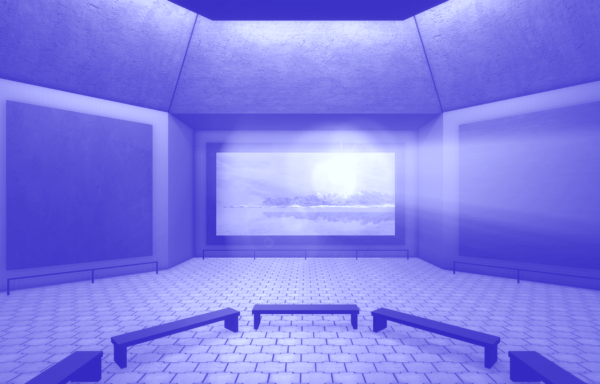 For their new work HELIOTONES, Lawrence Lek and Oliver Coates are creating a journey through a parallel world using a girls’ choir, cello, flute and contrabass flute and a first-person perspective video game. Lek’s specially created video takes the form of a virtual tour through worlds-within-worlds, a landscape based on the topography around Bergen. Mirroring Coates’ composition, the simulation focuses on primordial contrasts: the interface of ocean and land, mountain and tunnel, the echoes of civilisation and the remnants of wilderness. The music is a thickening of the acoustic with the synthetic. Female voices and flute lines are layered with digital voices and synth flutes in a circuit-bent non-12TET folk modality.

The journey culminates within a secular chapel devoted to human art: the Rothko Chapel in Houston, Texas. Inside it lies Pauline Oliveros‘ last mass Tuning Meditation from June 2016, re-discovered in Bergen – transitioning into a new Tuning Meditation for 2017, for performers, choir and audience.

Lek and Coates have collaborated twice before on art projects: Unreal Estate (The Royal Academy is yours) (Royal Academy, London, 2015) and QE3 (Glasgow International, 2016). Both combine first-person video game technology with live music responding to a series of recreations of known places and architectures.

The commission is supported by Arts Council Norway.

Oliver Coates is a cellist, composer and electronic music producer. He has released a number of records including Upstepping, which was an homage to UK garage music using cut-up and heavily processed cello and percussion sounds. For 2017, he has written a large-scale work for string quartet, “Shorelines”, and will appear as a concerto soloist and a live electronic act. He works frequently with Mica Levi and Jonny Greenwood, also known as lead guitarist and keyboardist in Radiohead.

Lawrence Lek is a London-based visual artist who uses video games and digital animation software to create virtual worlds. Often based on real places, his utopian or apocalyptic versions of everyday environments offer uncanny interpretations of reality. Despite their digital gloss, each of his site-specific simulations suggests different possibilities for real states of the physical world.

Frida Andreassen Lereng:
“At 10 years old, I was apparently a terrible singer. That’s why I wasn’t allowed to play an instrument.
But that wasn’t part of my plans. I wanted to play trombone! Or clarinet! So I started nagging. I nagged until mum got sick of it. Then I nagged until dad got sick of it. For two years I nagged.
Because that’s how bad I was at singing.
It then took me half a year to realise that what they’d given me was not a clarinet.
But by then I was sold.
That was 12 years ago.
Now even I am able to hear how bad a singer I am.
Luckily I am pretty good at the flute.”

Eirin Beate Åserud-Løvlid mainly works as a choral conductor for the Bergen Domkirkes Jentekor and Octavia Meland Ungdomskantori. In addition she works as a singing teacher in the cultural school in Meland, and as a conductor for DomkirkeSpirene, Damekoret Vox Animae and Os Vocalis.
In 2003 she founded Octavia; a choir that received high acclaim in no time. In the fall of 2005 she started conducting Maria Barnekantori, which now goes under the name of Bergen Domkirkes Jentekor. She works in the classical choir tradition, and is passionate about teaching children and youth healthy singing techniques in interaction with others.

Bergen Domkirkes Girls Choir formerly know as Maria Barnekantori, was founded in 2005 by Eirin Beate Åserud-Løvlid. It started out as a small choir with 5-7 members, but has since then grown bigger, splitting its members into three groups: DomkirkeSpirene, Jentekoret and Ungdomskoret. The choir has the highest standards and do 6-8 concerts a year, alone and with others. Their most well known event is the Lucia concert that they hold every 13th of December. The choir has performed at Bergen International Festival and also travel abroad to participate in competitions or to do concerts. Bergen Domkirkes Jentekor won silver in the international choir competition in Riva del Garda, in 2014.