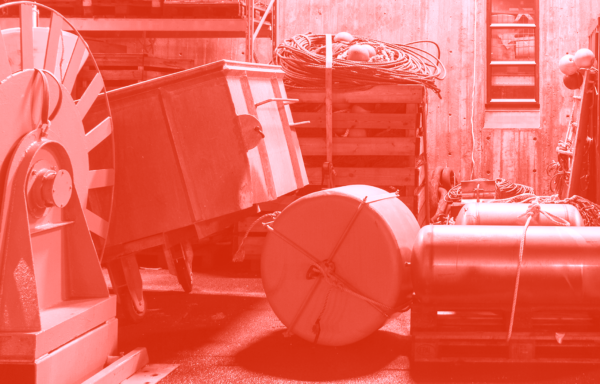 There is a straight line walking between Nykirken, the 17th century church built for the people of Nordnes, and the Havforskningsinstituttets skur 17, which houses myriad equipment needed for modern undersea exploration. Inside and in-between these cavernous and contrasting spaces we celebrate the opening of Borealis, and its connection to the material presence of the city, old and new, physical and watery.

Opening the festival with three world premieres by three prominent and contrasting Norwegian compositional voices, this concert will explore the concert spaces and the streets around. In the body of Nykirken, Øyvind Torvund has composed a work for the Royal Norwegian Naval Forces Band that merges the sound worlds of brass band performance with the synthesiser virtuosity of Øystein Moen. Field-recordist Jana Winderen presents a brand new multi-channel work surrounded by the marine research equipment, that explores the Norwegian Navy’s history of underwater recording, alongside her own recording practices. Improvising collective SPUNK will bring their own unique method of composition and merge with the Royal Norwegian Naval Forces Band creating a work that ties both warehouse and church together inside and out.

This concert will be both inside and outside, please dress warmly!

After the concert:
Reception in the crypt till 22.00
with a mini concert by students from the Griegakademiet, as part of the project BeSpoke.

Presented in collaboration with Havforskningsinstituttet, Nykirken and SFMK.
Photo by Magnus H. Sunde

The Royal Norwegian Naval Forces Band is one of Norway’s five full-time professional military bands comprising 28 musicians of the highest professional standard, who together form a dynamic and hugely versatile ensemble. The band performs in a variety of settings, military and civilian, and covers most genres. It made a name for itself particularly in the field of contemporary music, with numerous world premieres, festival appearances, CD-recordings, and – last but not least – by receiving the Performer Award of the Norwegian Society of Composers in 2008.
The Armed Forces’ Bands were also awarded with the The Arts Council Norway’s honorary prize for 2016 for their outstanding role in Norwegian cultural life locally, nationally and internationally since 1818.

Øystein Moen has throughout the last decade developed a unique expression rooted in electronic music, working as a central member of the Norwegian ensemble Jaga Jazzist and as a collaborator with Susanne Sundfør and her live band. He has also worked with Jenny Hval, Highasakite, Thea Hjelmeland and Stian Westerhus. Øystein worked with Øyvind Torvund on Torvund’s commission Sweet Pieces, which was performed at Only Connect in 2016. The piece was written specifically for the synthesizers Mellotron, Minimoog and Prophet 5, instruments that play an important role in Øystein’s expression.

Jana Winderen is an artist educated in Fine Art at Goldsmiths College in London, and with a background in mathematics, chemistry and fish ecology from the University of Oslo. In 2011 she won the Golden Nica, Ars Electronica, for Digital Musics & Sound Art¬ – one of the most important awards for creativity and pioneering spirit in the field of digital media. “Over the last ten years I have collected recordings made by hydrophones, from rivers, shores and the ocean in Asia, Europe and America, from glaciers in Greenland, Iceland and Norway. In the depths of the oceans there are invisible but audible landscapes, about which we are largely ignorant, even if the oceans cover more than 70% of our planet.”

Pippi Longstocking invents the word “spunk” and then spends one day looking for a meaning for the word. With the same attitude SPUNK freely creates improvised music, where each members individual expression matters equally. SPUNK was formed in 1995 and is an active ensemble both in Norway and internationally, live and on records. The concert space is very important for SPUNK and almost acts as a fifth member of the ensemble, as seen in their site specific installation Reir and Lys, or in concerts with live video. SPUNK is Kristin Andersen, Hild Sofie Tafjord, Maja S.K. Ratkje and Lene Grenager.

Norwegian composer Øyvind Torvund (b. 1976) played guitar in rock and improvising groups alongside regular musical studies in Oslo and Berlin. His music assembles disparate materials and inconsistent attitudes: sounds from rock or from everyday life (or nature) occurring in chamber music, simplicity in a complex context, improvisation coexisting with exact notation, music combined with film or projections, and seriousness in counterpoint with humour. Øyvind was nominated for Nordic Council Music Prize in 2016.